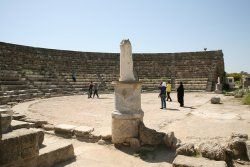 Throughout history, Cyprus has been the center of attraction, hosted civilizations of all times. So, it is possible to come across with the traces of history. Venetian, Lusignan, Byzantine, Ottoman and British traces, and many more.

North Cyprus shares the heritage of this history with the world citizens. Venetian walls surround cities Lefkoşa and Gazimağusa in North Cyprus. The castles with their entire splendor, the cathedrals where kings wore crowns, monasteries dedicated to saints spreading Christianity, tombs, dervish lodges, and neighborhoods with social housing, are still being visited, still rule.

In North Cyprus where spectacular historical monuments which allowed Gothic architecture experience its peak, you may see, visit the City of Salamis, a great masterpiece of ancient periods; St. Hilarion Castle created by Byzantines; Bellapais Monastery, a work of Lusignan Period; Ottoman Grand Han, and the works of the British era, and follow in the footsteps of those times.

City of Soli, Vouni Palace and St.Mamas Monastery in city of Güzelyurt/Lefke; Girne Castle, Belleapais Monastery and St.Hilarion Castle in city of Girne; Venetian walls, St.Sophia Cathedral, Houses of Arabahmet and the Great Han in capital city Lefkoşa; Venecian Palace, Namik Kemal Dungeon and St.Nikolas Cathedral in Gazimagusa; the ancient city of Salamis, St.Barnabas Monastery, Apostolos Andeas Monastery in İskele-Karpaz area are only a few heritages waiting for you.

Please note that the place where the port castle which inspired British writer William Shakespeare while he was writing the famous tragedy, Othello, is located in North Cyprus. Also, the St.Hilarion Castle was included in the subject of 'Sleeping Beauty' of Walt Disney, the famous creator of cartoon characters is located in North Cyprus as well with the night lightening shaped "Dinosaur".

Come to meet traces of the historical heritage that witness a history of 10,000 years. The island's first human trail begins in 8000 BC. Among the civilizations that left traces over the centuries since the Neolithic Period, you can see traces of the Phoenicians, Assyrians, Egyptians, Ptolomeans, Persians, Greeks, Romans, Byzantines, Louisianans, the Venetians, the Ottoman Empire, and British Administration.

Here are main historical attractions listed by cities of North Cyprus for the ones planning to enjoy Historical Tourism:

Nicosia (Lefkoşa) :There are 11 bastions and 3 entrance doors in the section of the capital, Nicosia, also known as 'Ledra, Ledra, Kermia' in the process of history, surrounded by walls of about 4.5 km. Girne Gate (Porta Del Proveditore), which is one of the 3 gates leading into the historic city walls of Lefkoşa and was built during Venetians' Period in the year 1567, 16th century Mevlevi Tekke which is one of the important works of the Mevlevi in Cyprus, Venetian Column-obelisk which was one of Nicosia's symbols, the Great Han with 68 rooms belonging to the Ottoman Period in , 16th century which has been organized as a venue where Cypriot Craft and Culture of today are reflected are the points that need to be addressed while stepping Nicosia. St.Sophia Cathedral(Selimiye Mosque), which was built between 1208-1326 during Lusignan Period, is one of the most important Gothic architectural structures.

Kyrenia (Girne): The Girne Castle which mainly have traces of Byzantine, Lusignan and Venetian Period, and reached the present day in a very robust structure, and was re-created with the understanding of contemporary museum and the sections formed within, Presentation Room, Dungeons, St. George Church, Reenactment of Vrysi Neolithic Place, Kirn Tombs, Mediterranean Burial Excavations section, Venetian Tower, the cistern, the Tower of Lusignan, and the Shipwreck Museum dated to 300 BC in which the ship which is a witness of a journey 2300 years ago. The historical Port of Kyrenia, which is accepted as the most beautiful harbor in the Mediterranean Sea, St.Hilarion Castle which is 732 meters above sea level and is one of the 3 mountain castles in the North Cyprus and exhibition sections, Presentation Room, Barbikan, Pantry, Workshop, Kitchen, Royal Palace, the Cistern , Prince John's Tower and the Byzantine Church. Here's a masterpiece. Bellapais Monastery, which is one of the finest examples of French Gothic architecture, is the most splendid work of the medieval ages in Eastern Mediterranean. Other places of interest in the Kyrenia region include; Buffavento Castle, the Church of Archangel Michail and the Icon Museum, Sourp Magar Monastery, Antiphonidis Church, Ancient City of Lambousa,

Famagusta (Gazimağusa) "Open air Museum- Othello's city" Gazimağusa, each corner of which smells of history and mystery, is one of the world’s landmarks of history and culture heritage. The ancient City of Salamis, which is one of the largest ancient city kingdoms of Cyprus and has been the capital of Cyprus for many years; St.Epiphanius Basilica, the largest basilica of Cyprus, Campanopetra basilica, Agora, the Necropolis of Salamis, the King Tombs are open to visitors. St.Barnabas Monastery, one of the most important locations within the scope of faith tourism; Icon and the Archaeological Museum; 15th century Venetian structured Othello Tower, where the story which is the subject of W.Sheakespeare’s Othello tragedy took place; St. Nicholas Cathedral (Lala Mustafa Pasha Mosque); 14.yy. Lusignan period St.Peter and St. Paul Church (Sinan Pasa Mosque- Wheat Mosque); Venetian Palace (Piazza del Proveditore), dated 1522; Cafer Pasha Bath made in the beginning of 1600s; 28th Çelebi Mehmet Mausoleum; Twin Churches; 13th century Church of St. George of the Latins; St. George Church of the Greeks, dated back to 16th century; the Nestorian Church; Twin Churches; Namık Kemal Dungeon, dated back to 1837-1876; Akkule (Land Gate-Ravel), Sea Gate (Porta Del Mare), Fig Cave, and Enkomi, which is dated to Late Bronze Age and was one of the most important trade centres of the Ancient Age, and Alasya. St. Nicholas Cathedral(Lala Mustafa Pasha), built between the years 1298-1312, where the kings of the Lusignan wore crowns, is one of the wonderful examples of gothic art and was transformed into a mosque with the addition of minarets during the Ottoman Period.

Iskele/Karpaz region "virgin geography": Panagia Theodokou Church and St.James Church in İskele. Kantara Castle which is one of the 3 mountain castles over Beşparmak Mountains and approximately 700 m above sea level. Kanakaria Kanakaria Church in Boltaşlı village. King's Hill in Kaleburnu Village, Nitovikla Castle, Ay.Trias Basilica famous for its 5th & 6th century AD floor mosaics in Sipahi Village, giant statues of the Archaic Period, Aphendrika (Urania), Ay. Philon Church dated back to 5th century BC Neolithic Kastros City dated back to 6000 BC and Apostolos Andreas Monastery, which is located in the easternmost end of the island of Cyprus and considered Holy.

Güzelyurt-Lefke region "brotherhood of blue, green and orange" : The main places to be visited in Güzelyurt-Lefke region, where orange, green and blue colours can be seen in all their glory, are as follows: Güzelyurt Archaeology and Nature Museum; “Soli’s Golden Leaves” section, where golden finds of excellent beauty exhibited inside the museum are located; St.Mamas Monastery and Icon Museum; the ancient city of Soli which is one of the most important Ancient City Kingdoms of Cyprus; St.Auxibius Basilica, dated back to Early Christian Period, in which floor mosaics of excellent beauty, dated back to 4-6th century are located; the Roman Theatre of 3500-4000 people, and the Agora. Vouni Palace comprised of 137 rooms, which is the only work that was built with Persian architecture unique to Cyprus and dated back to 5th century BC, and Athena Temple.

Petra Tou Limnidi, dated back to Neolithic Period 5000 BC; Ottoman and British Period works of art in Lefke, which is an old Turkish town; Piri Pasha Mosque, Water Arches, Ay.Georgios Maronite Church in Koruçam village; the Blue Pavilion located between Tepebaşı and