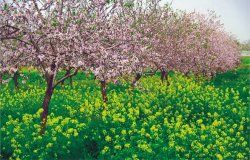 In North Cyprus, which is beautiful in another way in every season, olive, carob, pine, cypress trees and green scrub vegetation constitute the dominant plant configuration. Olive and carob trees and traditional trees of North Cyprus. Same as Karpasia Peninsula at the foothill of the five finger mountain you could find pine trees, wild myrtle and olive trees. You could breath special smell of those trees while enjoying trek routes. Güzelyurt area at the western part of the island, citrus orchards are offering fresh orange juice on the way.

Enjoy landscape at the higher altitudes that cedar, juniper, cypress and pine trees around that are all year green.

Have a good time watching Acacia and eucalyptus at some of the coastal areas of North Cyprus.

Do not forget to add "Ancient Olive Trees Forest" at the western part of the island to your places to visit list.

Vegetation with an amazing beauty which is wrapped in different colors in four seasons reveals itself in Northern Cyprus which has highly fertile soil. In addition to citrus products, such as orange, lemon, mandarin, grapefruit, water-melon, vegetables such as well known "Cyprus Potatoes" and many types of fruit are grown. While coastal sections are covered with eucalyptus and acacia trees, the mountains are covered with fragrant pine trees.

In Northern Cyprus, while the nature starts to liven up in winter; in spring, the most beautiful colors wake up and take their place in this beautiful picture beyond comparison. In the summer, while good byes are said to the festival of colours, long-lasting greeting of the Mediterranean sun is received. Autumn is the season of relapsing into calm and peace.

The real taste of spiritual peace and life sought is in Northern Cyprus.

The natural pattern starting from the westernmost Petro Tou Limnidi cliffs waits for you with its great beauty up to Zafer Burnu (Cape Victory) which is located at the end of Karpaz Peninsula in the easternmost direction.

Fertile lands adorned with Mediterranean vegetation lie across in the same way like on the day of their creation.

Sunbathing in peaceful pristine shores of Cyprus with the sounds of cicadas, relaxing and meeting with the cleanest waters of the Mediterranean are the most important riches of Northern Cyprus. Enjoying the sea in virgin beaches is equal to the unique pleasure of the holiday. You must visit and swim at the most virgin beach of North Cyprus "Golden Beach".

While green Güzelyurt Gulf in the east waits for you in the company of cultural heritage witnessed by Soli and Vuni, you will sip your coffee under the shadow of monumental olive trees.

While mysterious Lefkoşa of Ottoman and Gothic architecture accompany you in the corridors of history, you will meet Cathedrals of kings Ottomans crowned with their minarets.

You will be able to track Louisianans, and Venetians in ancient Girne (Kyrenia) Harbour under the shadow of Beşparmak Mountains.

While heading south, you will be surprised by the blondness of Mesaoria, Venetian Walls of Gazimağusa will invite you to the Othello Castle in the company of the Shakespeare's sonnets ..

While the mystery with magic taste of Gazimağusa sees you off to virgin lands of the island, you will let yourself go to untouched, undiscovered Karpaz Peninsula.

In Karpaz where Medoş tulips (known as Tulipa Cypria) sway and birds which you can only see in this region sing, islander donkeys will greet you.

The Karpaz Peninsula is one of the last true undeveloped coastal environments in the Mediterranean. There are more than 1,600 plant species in the Karpaz, 22 of which are endemic. The Peninsula’s bird habitat has more than 350 species, 7 of which are endemic, and for reptile lovers there are more than 26 reptile and amphibian species in the Karpaz, including the famous sea turtles. Karpaz beaches comprise the main nestling ground for the Caretta Caretta sea turtles in the Eastern Mediterranean.

Be sure that during your stay in Northern Cyprus you will find many things to see and do. As a nature lover, you may explore the orchids, endemic plants of Cyprus and its the endless beaches, observe protected turtles, its natural beauty which hosts many species of plants, and wild life, and experience the rural life unchanged for centuries, with the flavour of eco-tourism.

You could visit North Cyprus 12 months in a year to enjoy nature and related activities. It has quite a healthy climate, and a typical Mediterranean climate is dominant. Summers are long and hot, while winters are short and less rainy. Cold winds, frost and snow concepts are not something familiar to Northern Cyprus. Rainfall is mostly in the form of rain. 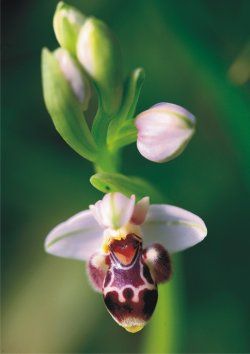 Approximately 1500 of 1900 species spread over the flora in Cyprus are in Northern Cyprus. Sunny days lasting for more than 300 days of the year and unique features of the Mediterranean climate have been a major factor on the formation of such a great natural wealth. Among the plants spread throughout Northern Cyprus, there are 19 endemic plant species and 32 kinds of wild orchids which are found nowhere else in the world and grow only in Northern Cyprus. Only one type of orchid (orchid kotschyi) has been identified as endemic in Northern Cyprus. The best known endemic among endemics in Cyprus is Tulipa Cypria, also known as Cyprus Medoş Tulip, for which a festival is held every year in March in Tepebaşı and Avtepe villages. All the orchid species, ancient trees, endemic and rare species, which are among the most important values of flora and fauna, are under protection.

The old sycamore in front of St. Nicholas Cathedral (Lala Mustafa Pasha Mosque) has witnessed many historical and social events throughout its life. The tree which is the oldest live witness of Lusignan, Venetian, Genoese, Ottoman, British periods, and recent history is said to have been planted in 1298 when the construction of the cathedral was started. "Ficus Sycomorus''(sycamore), which is about 710 years old and is protected as a memorial tree, is known as the oldest living tree in Cyprus. 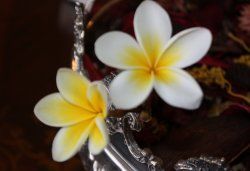 Herbarium, Kyrenia was founded in 1989. The Botanist Dr. Deryck Viney has managed to list 1250 flora specimens in Hebarium. Many pressed plant examples and photographs are welcoming you at the Herbarium 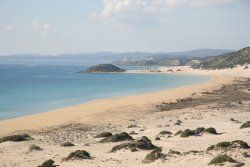 The beach called "Golden Beach" at Karpaz offers spectacular beauties to tourists visiting the site. White lilies are on the sand dunes of the beach. You could spend the day sunbathing and swimming on the beach that offers you pristine golden sand, clear blue sea with spiritual silence.

The Myth of the White Lilies at the Golden Beach

Once upon a time the most beautiful Princes of the world was travelling at the Eastern Mediterranean. Due to the terrible storm, the princess who was travelling along with her guards, had to approach to North Cyprus Golden Beach at Karpaz Peninsula. The ship tried to avoid from the storm, however it did collapsed and fall apart. She and her guards had to swim until the Golden Beach of Karpaz. Unfortunately, the Afrodit became jealous, when they reach the shore, she stopped them and turned them into the rocks. When you walk along the golden sandy beach you will see a white rock, it is her and other rocks are her guards and parts of the ship. The White Sand Flowers on the Golden Beach is believed to be a sign of the aliveness of the Princes. 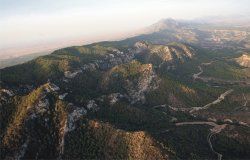 In May 1992 European Union governments adopted legislation designed to protect the most seriously threatened habitats and species across Europe. This legislation is called the Habitats Directive and complements the Birds Directive adopted in 1979. At the heart of both these Directives is the creation of a network of sites called Natura 2000. There are 6 areas in North Cyprus that are candidate to the Natura 2000. Currently the EU consultants are working on those sites.